The airport of Heraklion is named after Nikos Kazantzakis, one of the most notorious Cretan writers.
It is 6 klms east from the city and 20 klms from Agioklima, Petrokefalo and Agio Myron. It is considered one of the most important airports of the Mediterranean.

The flights from N. Kazantzakis Airport connect Crete with the big airports of Europe and Middle East. So during summer you can fly from Heraklion to Paris and other airports of France, to London, Manchester, Amsterdam, Berlin, Prague, Budapest, Zurich, Vienna, Moscow, Kiev, Catania Sicily, Rome, Milan and Verona of Italy, Istanbul, Tel-Aviv, Larnaca Cyprus. 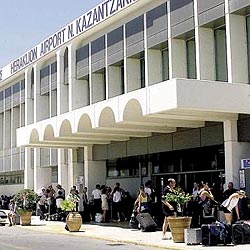 You can also fly to other Greek destinations like Rhodes, Kos, Santorin, Ikaria etc. The airport of Heraklion is a transport station for people and merchandise. It is also considered to be the “birth place” of Aegean, one of the biggest airlines in Europe and you can fly to anywhere after a quick stop to Athens.

View (EN) & Submit your own...
View all Reviews (all languages)